The Cuban Missile Crisis, 55 Years Ago 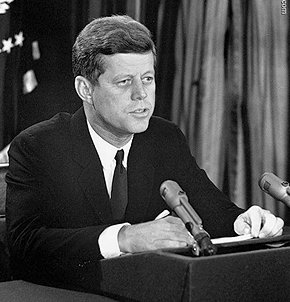 In October 1962 President Kennedy announced the Cuban Missile Quarantine and USS Sablefish  joined a massive submarine-aircraft barrier to defend against a possible Soviet submarine invasion.
I was on leave, with my wife and children, visiting my parents in  when President Kennedy went on television (Oct. 22, 1962) and declared the Cuban Missile Quarantine.
We piled our two boys in our Opel station wagon and headed back to .  All along the way, through , , and on to , Americans were getting ready for war. Here only 17 years after World War II, most adults knew about war, and people were digging air raid shelters, and storing up water and food.  The Navy and the Air Force were flying all manner of military aircraft to , and Navy ships were all heading to sea.  Someone said that  nearly sank below sea level with all the planes!
The whole American Defense establishment went to Defense Condition THREE, which meant this was really serious business! 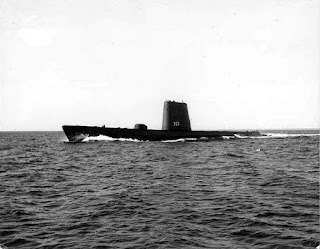 My submarine, Sablefish, got ready for war patrol, welding the escape hatches shut, and quietly glided out to sea, before I could return.

When I arrived in  I was assigned to a staff to be flown “somewhere” to coordinate the Quarantine operations between submarines, surface ships, and anti-submarine aircraft.  As many of our ships encircled , we fully expected the whole Soviet submarine force to come roaring out of  bases in the Soviet Arctic and sail around the North Cape, and down into the .  Our submarines and antisubmarine warfare (ASW) ships and aircraft would be there to meet them.

It was still a secret where we were going to set up a staff.

Within a few hours, we boarded buses and headed for Brunswick Naval Air Station in , and we were off— we thought maybe ,, maybe .

A few hours later, we landed in .  It was late October, and in , it is cold and the wind blows nearly all the time.  If you are planning a vacation in , I advise against October.

We were located on a U.S. Air Force base, and I was assigned a room on the tenth floor of a Bachelor Officers’ Quarters on this desolate base.  If the icy wind was miserable at ground level, on the tenth floor it was much worse.  However, there was no time for idling— the room was just for a few hours of sleep between shifts, because we were tasking a huge collection of submarines, patrolling all across the , and aircraft, flying over them, coordinating ASW operations.  There were also aircraft flying other electronic emission detection missions.  Of course this was all happening around the clock.

I went along on some of the airborne ASW detection missions about P2V Lockheed Neptune planes.  These planes carried a crew of about eight, and stayed airborne for about 10-12 hours.  That was a lot of time to spend looking at thousands of square miles of ocean, and listening to sensor signals and radio messages from our submarines.  Our airborne antisubmarine warfare people do a tremendous job, operating in often miserable weather!

On October 28, 1962, Soviet General Secretary Nikita Khrushchev announced that he was pulling Soviet nuclear missiles out ofCuba, and President Kennedy ended the Quarantine shortly afterward.  My submarine came back to port, and I went back aboard.

Posted by The Personal Navigator at 1:26 PM