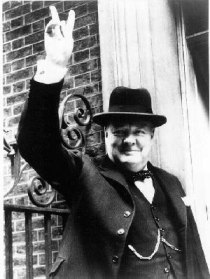 What is a “Charismatic Leader”?

He (or she) leads by personality and charm.  He is an excellent communicator; he is also an excellent reader of people, their faces, their aspirations, their fears. He is able to sense the mood of a room and shape it to his objectives.

Adolf Hitler seems to have been particularly effective at firing up a gathering of many thousands to fight for the perceived needs of the Fatherland. He drew upon natural suspicions and uncertainties of people to carry out a devastating Holocaust, the extermination of millions of Jews, as well as Gypsies, homosexuals, and disabled people.

Do you see Donald Trump as a charismatic leader?  He has drawn upon the fear of immigrants, foreigners and the unknown to the appreciation of many thousands, if not millions.

My candidate for “Charismatic Leader” is Winston Spence Churchill.

No one in the made more of an impact upon that country, indeed the , in the Twentieth Century than Winston Churchill.

Roy Jenkins (1920-2003) was a career politician, entering Parliament in 1948 and staying connected with British government for 50 years.  His biography of Churchill, one of 18 books he wrote, is an excellent look at the long life of Winston Churchill (1874-1965).

Churchill lived his life with a destiny for greatness.  He was a soldier, but unlike nearly any other.  He managed to position himself where he would experience danger, and then he managed to capture the exclusive rights to the story. Even when he was on the Queen’s list as a young soldier, (in India, Sudan and South Africa) he was mailing back thick dispatches to London newspapers.

Churchill’s adventure in 1899 in the Boer War in South Africa had him involved in a small battle on train tracks, trying to get wrecked trucks off a track. He was captured and imprisoned by the Boers, but escaped after 24 days. You can be sure this received large attention from the Boer government, and Churchill covered it thoroughly in his autobiography.

Roy Jenkins wrote this voluminous engorgement of parliamentary history in two and a half years, when he was in his eighties.  At every point one can sense Jenkins’ rather tart view of Churchill.  He gives Winston his due, as a statesman, elegant speaker and writer, but also as an almost mythical character,  who always, in the direst of times, manages to sit down to a well-laid table and enjoy a fine meal, with plenty of champagne, port, brandy and a good cigar.

Jenkins is clear-eyed about Churchill, and his charms.  All that searching for danger, and then writing about it, meant that Churchill was building his résumé, ensuring that all that fine bravery and derring-do was preserved for history.

Churchill might have been one of those fine men we have seen all through British history, and that of the .  The man, born to a leading family, accustomed to wealth and station, attending the “right” schools, occupies reasonably impressive posts in government.

However, Churchill, who tried his utmost time and again to elevate himself in British government, from his days as a “Flailing” First Lord of the Admiralty in World War I, became the right man at the right time after Prime Minister Neville Chamberlain’s disastrous handling of relations with Adolf Hitler put Britain at the brink.

It is not too hard to imagine that if Hitler would have foregone attacking the USSR, and concentrated on conquering Britain, if Chamberlain had remained in power, and if the United States had continued to watch the war in Europe with interest, the Nazis could have gained the British Isles.

It is amazing how Jenkins, an excellent writer, can delve into tons of letters, diaries, official journals and other material to construct a colorful, extremely detailed picture of Winston’s life and his relations with those around him.  Churchill often whisks himself away to the south of France, or cadges a voyage in the Mediterranean aboard the yacht of a wealthy acquaintance, and while he is thus “resting”, churns out reams of manuscript for his next book or article.

Churchill’s life style was legendary.  He stayed in bed until noontime, furiously dictating memos, letters, and newspaper articles. Then his valet drew his bath and he lowered his fat, pink body into the tub.   After dressing, he would engage in the performance of luncheon, which routinely involved distinguished guests who would partake of Winston’s rich wit and wisdom.  There were always good food, wine and spirits, and cigars.

In the afternoon, if Parliament were sitting, he would attend, and perhaps deliver a speech.

Then there would be dinner, another spread of elegant food, drink and people, usually with Winston as the principal figure.

Jenkins’ account of Churchill’s leadership of Britain after he became Prime Minister in May, 1940 is particularly interesting.  Winston flew to France numerous times to try to give the French leaders (PM Paul Reynaud et al) encouragement to resist Hitler. At the same time, Churchill was trying his best to bring the United States into the fray, so once he promised the French that American intervention was nigh.  Jenkins called Churchill’s hopefulness of that “living in cloud-cuckoo land”.

Churchill tried everything to get Roosevelt to commit to U.S. intervention.  Roosevelt sent Harry Hopkins to visit Churchill early in 1941, and Hopkins spent a month with him.  The two formed a fast friendship. Jenkins notes that Churchill’s and Roosevelt’s relationship was never that warm sort of friendship.

Here’s this comment:
“…in joint wartime photographs, from Placentia to Yalta, Roosevelt always looked Churchill’s superior. He held his head higher, and his careless yet patrician civilian clothes suited him better than the fancy uniforms which Churchill was only too inclined to assume…..Roosevelt… often enhanced by a long cigarette holder at a jaunty angle. In the nicotine stakes this was a more elegant symbol than Churchill’s often spittle-sodden cigars.” p.663.

Churchill came to lead in its darkest hours at the start of the war with Hitler. He replaced Neville Chamberlain, a man who will forever by identified with weakness and appeasement.   Nazi bombers were pounding and other British cities, and invasion by the Germans by air and sea seemed imminent.  Morale was low.  His leadership at the beginning was resisted, and unappreciated, but he persisted, and the British people came to see him as the figure leading them to victory.

In 1946, this absolutely irreplaceable leader of the British people was voted out of office. Clement Atlee*, who had served as deputy prime minister from 1942 in Churchill’s wartime coalition government, took his Labour party to a landslide victory.

After he was voted out of office, the new United States President Harry Truman invited Churchill to come to Westminster College in Fulton, MO to speak.  This was the famed speech where he declared: 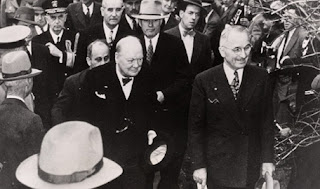 “From Stettin in the Baltic to Trieste in the Adriatic, an iron curtain has descended across the Continent. Behind that line lie all the capitals of the ancient states of Central and Eastern Europe. Warsaw, Berlin, Prague, Vienna, Budapest, Belgrade, Bucharest and Sofia, all these famous cities and the populations around them lie in what I must call the Soviet sphere, and all are subject in one form or another, not only to Soviet influence but to a very high and, in many cases, increasing measure of control from Moscow.”

In this speech, which was met with great animosity not only in the USSR, but in many parts of the U.S., Europe and the U.K., Churchill drew the shape of the Cold War that would dominate our lives for the next four decades.  It was primarily important for sounding the call for an alliance between the U.S. and the U.K. to oppose communism, and the beginning of the idea of a North Atlantic alliance.

Churchill suffered a final stroke 12 January 1965 and died 24 January. His funeral was a grand affair, with his body lying in state in Westminster Hall for three days. This was the first time such an affair for a non-royal personage had taken place since the death of Gladstone in 1898.

*Atlee was generally considered to be lacking in charisma, but he was tremendously effective at working behind the scenes. He and the Labour party created a welfare state, including formation of the National Health Service, and nationalization of public utilities and major industries.

NEXT FOR ROCKPORT HISTORY BOOK CLUB:
Wed. Oct. 28, 2015: Show Trials in History. [Proposed by Janos Posfai]   Read how nations and leaders have used a well-publicized court trial to serve another need, like demonstrating power, making peace, deflecting responsibility, etc.
Examples: Trial of Socrates; Martin Luther at the Diet of Worms; Sacco Vanzetti; Nuremburg War Crimes Trials; Julius and Ethel Rosenburg; Trial of Nicolae and Elena Ceaușescu;  Saddam Hussein in Iraq;   Stalin’s NKVD show trials; Trials in Stalinist Hungary like Cardinal József Mindszenty, oil executives, L. Rajk.
Wed. Dec. 2, 2015:   Elections in American History. [Suggested by Rick Heuser] Donald Trump may think he is something unique in the long history of campaigns and elections in the United States of America, but our history is chock-a-block with strange, weird and fantastic characters and events. For this November meeting, one week late to account for Thanksgiving, read any book about presidential campaigns and elections, There was 1800 when Adams ran against an "Un-Christian Deist", Thomas Jefferson.  There was 1828, when things got dirty-- the Adams men said Jackson was the son of a prostitute and a Mulatto, and a bigamist and an adulterer. We had Know-nothings, Mugwumps, Half-breeds and Progressives. One man, Eugene V. Debs, ran from prison and still received 900,000 votes. And then there was Watergate... and the Swiftboaters.
For 2016, consider these possible topics:
History of Labor Movements,
History of Money and Money Handling or Banking,
"The End of the World"-- history of doomsday forecasts,
History of Journalism and the Media,
or History of ___________ (fill in the blank).


Posted by The Personal Navigator at 1:31 PM