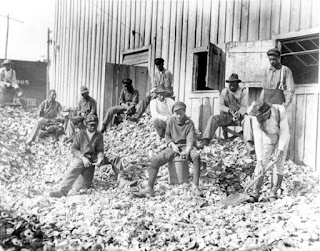 My grandfather owned an oyster business in , up on about 1900.
He had a whole crew of African-American men and women shucking oysters, and when my Dad was little he remembered how they would sing the old Negro spirituals as they worked.  Man, could they shuck those oysters!  I imagine quite a few of those people had been slaves just 35 years before that.
Marty asked me to get her a couple of 8 oz. containers of fresh shucked oysters today, but everywhere I went, they were out.  So I decided to buy some oysters in the shell.  How hard could it be to shuck oysters?
I brought the oysters home, and Marty brought out an oyster shucking knife and told me about being sure to cut the muscle, and to save the nacre.  I came from the , and should have been an old hand at opening oysters, but I guess I missed that experience until now.
So I did what any pioneer would do—I looked up “shucking oysters” on Google, and soon was watching a video of a guy shucking oysters expertly.
It’s simple.  You just hold the oyster flat side up, hinge end toward you, and place the knife in where you see a tiny crack.  You slide the knife in about a half inch and pry the shell open, then cut the muscle on the top shell, so the oyster is just lying in the bottom shell, waiting to be slurped.
I was doing this over the sink.  The expert had advised that I might find that a screwdriver opens the oysters easily, and results in less chance of knifing yourself if your hand slips.  And you should wear an oven mitt, also to prevent hurting yourself.
The first oyster I was trying to shuck was not very cooperative.  I couldn’t find any place to stick the knife, and then the shell squirted out of my gloved hand and went down the drain. That's where the garbage grinder is. Of course, my hand is too big to get down there to retrieve it, and I started trying to find a long set of tongs.
In the past I have used the vacuum cleaner—I stick the suction down the drain and pick up whatever I've dropped down there.  It’s usually a silver spoon or other such valuable item.
That didn’t work because the shell was too heavy.
Finally, using tongs, I retrieved it.
By now, I had shucked ZERO oysters, and I was already worn out.
I was thinking about those old African-Americans, singing and shucking, probably 100 oysters while I was messing with the vacuum cleaner!  I thought about those huge piles of shells.
Soon I managed to open an oyster.
Not bad.
Then another.
But the one I had retrieved from the drain was one tough customer.  I still couldn’t find any place to stick the knife.  I just stuck the knife in the general vicinity and hammered the shell on the wooden cutting board near the sink, and finally the shell started to come apart—in pieces.
This was not going to be a well-shucked oyster.  And the nacre? Forget it. 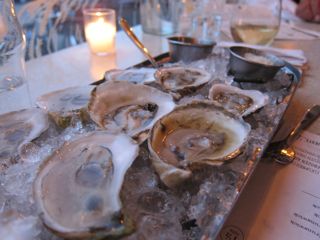 I don’t think I will become a master oyster shucker. 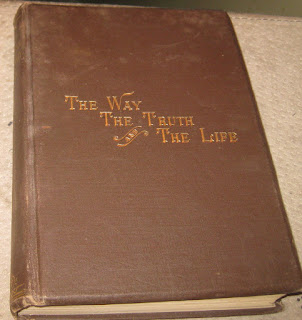 The Way, The Truth and the Life; a Hand Book of Christian Theosophy, Healing, and Psychic Culture, A New Education, Based upon the ideal and method of the Christ by Dewey, J.H., M.D.1888         Buffalo, NY: J.H. Dewey, M.D. 408 pp.    13.5 x 19 cm. Author, "actively engaged in the practice of medicine", brings forth his study of the remarkable developments connected with specific religious experiences, particularly the study of the life of Christ. "Is Christ to be Superseded?" "Christ the "; "True Basis of the Higher Education", "Method and Specific Processes", "Spirituality the Only Basis"; Appendices I, II, III and IV; index.           Dark brown cloth on board with gilt title on cover and spine, minor wear to heel and toe of spine, cover lightly mottled. Inscription on ffep: "To Louise Grant From Mrs. C.B. Sawyer, , May 30th, 1889."  Very good.(8313)            $26.00. Religious/Faith Healing 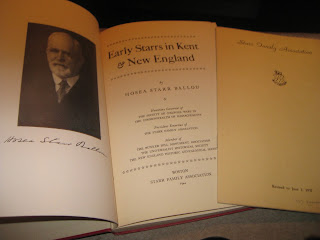 Early Starrs in Kent & New England  (With Starr Family Association booklet, 1937)        by Ballou, Hosea Starr  1944 Boston, MA: Starr Family Association. 141 pp. + 8 pp.    15.5 x 23.2 cm. Compilation of a series of articles on the forbears of the Starr family in the U.S. and England, together with an 8-page Starr Family Association booklet published in 1937. Includes articles on English Ancestry, Early Life in , English Baptismal Records, Dr. Comfort Starr Arrives in , The Monhegan Island Episode, Rev. Comfort Starr Graduates from Harvard, more.Includes frontispiece photo of author.  Red cloth on board with gilt lettering, moderate wear, text block tight and clean, inserted papers very good, book very good. (8310) $50.00.  Biography
Enigmas of Life by W.R. Greg Greg, William Rathbone 1873     , MA: James R. Osgood and Company. Greg (1809-1881) offers in this book some suggested thoughts, based upon his outlook after having reached the age of 60. In his Preface he sets forth the framework for his thought: "..it becomes possible at once to believe in and worship God, without doing violence to our moral sense, or denying or distorting the sorrowful facts that surround our daily life." Greg takes on Malthus' discouraging theory of geometric progression of populations against arithmetic growth of sustenance, in "Malthus Notwithstanding". He takes on in "Non-Survival of the Fittest".  322 pp. 12.6 x 19.4 cm. Maroon cloth on board with Gilt titles, minor wear and blotches on cover. Inscription on front endpapers: "Louise Grant, 1873". Very good. (8297) $27.00. Educational/Philosophical 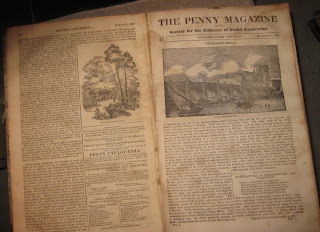 Penny Magazine of the Society for the Diffusion of Useful Knowledge, The, Vol. I, March 31 to Dec. 31, 1832 by Knight, Charles 1832 , : Society for the Diffusion of Useful Knowledge. Lord Brougham was the instigator of the Society for the Diffusion of Useful Knowledge in in 1826, and it published its first weekly eight-page issue in March, 1832.  The intent was to spread knowledge amongst the poor, and this little paper was distributed all over the , selling 200,000 copies at its peak.  Publication ceased in 1844, after demand had faded and publishing expenses grew too great. Articles in this first volume did not patronize the uneducated--, now greatly improved, illus. with woodcut.  , with woodcut, recently discovered, article takes readers on a walk through the city. British animals: The Dormouse, and the Mole, with illus. "On the Choice of a Labouring Man's Dwelling"; History of Somerset House, with illus.  Sugar, its agriculture and production. Statistical Notes on the population of and . Instruction of the Deaf and the Dumb. " "--old bridge is almost pulled down and the now sweeps through the five broad arches of the new bridge.Review of "Memoirs of the Life and Writings of Benjamin Franklin". The --article describes obelisks, with illustration. "The of " with illustration from the largest state in the American Union. "Mahogany" (Swielenia mohagoni) notes that until recently only the rich could afford a mahogany table, but now (1832) anyone can. All about cutting and transporting from . Many more abstruse topics for the poor. 389 pp. + index 18 x 28.5 cm. (11½” tall). Marbled boards with calf spine, front cover detached, text block has damp stain on first 85 pages, yet good.  Overall, poor.    (8269) $92.00. Educational
Sermons by the Late Rev. George Shepard, Professor in Theological Seminary, With a Memorial by Prof. D.S. Talcott, first edition           1869     : Nichols and Noyes. 368 p.  13 x 19..5 cm.   This book today is widely circulated in Print on Demand and electronic versions, but this original 1869 edition is the one that captured the attention of so many. Rev. Shepard (1801-1868) preached the Gospel, and was unsparing in his criticism of slavery.  At his death he was praised by the noted abolitionist, William Lloyd Garrison. Memorial by Prof. Talcott relates life and brilliant theological path of Rev. Shepard, from birth in 1801 in , on to preaching in and Professorship at Bangor Theological Seminary. "The Diversions from Preaching" criticizes popish influences in the contemporary Protestant churches. "The Eclipsed Luminary" preaches from Matthew. When the Christian ceases to shine, and darkness comes in its place, it is very great darkness. "Salvation in  no Other" from Acts iv. 12. "The Shipwreck of Paul" from Acts xxvii. 22, 31. Better to put trust in God, rather than bolts and planks. "Elijah the Tishbite" from I Kings xvii. 1. "Not Fit for the Kingdom" from Luke ix.62, preaches a stern message for the converted. "The End at Hand" from I Peter iv.7. and more.           Decorated brown cloth with gilt design and lettering on spine. Engraving of Rev. Shepard at frontispiece. "Nellie Grant" stamped on ffep and "" written in pencil. Clean and tight copy. Very good. (2929) $48.00. Religion

Sovereigns and Courts of Europe, The by "Politikos" with Portraits, Authorized Edition 1893     : D. Appleton and Company. 439 pp. w adv. 12.8 x 19.6 cm. This book today is widely circulated in Print on Demand and electronic versions, but this 1893 authorized edition  captured the attention of many for its gossipy "insider-story” style. Sultan of mysterious 1876 death of ex-Sultan, five days after he was deposed on plea of insanity. Alexander III of Russia's story begins with death by horseplay in 1865, assassination of his father, Alexander II in 1881 and Alexander III's accession to the throne, celebration for half a million common folk at one huge dinner... William II, Emperor of Germany, whose birth in 1859 was heralded all over by a 101-gun salute. Death of Victor Emanuel I, first king of unified brought great sadness, and King Umberto I is now king.  He is the only man generally respected in , author writes. Book ends with long section on Queen of , whose portrait serves as frontispiece.            Decorated maroon cloth on board with gilt and red printing. Slight edge wear and worn spot on back cover. Inscription on ffep: "Happy New Year dear Nellie (Grant), 1893 Angelina P. ." Very clean and tight. Very good. (2939) $36.00.  Biography

Song of the Sower, The by William Cullen Bryant, illustrated with Forty-two Engravings on Wood           1871 : D. Appleton and Company. 48 pp.     17 x 23.5 cm. This book today is widely circulated in Print on Demand and electronic versions, but this 1871 edition is truly an elegant work of art.  Add to that the owner carefully slipped poetry from newspapers in the 1880s and put them in the pages, but didn't stain the pages.  Beautiful engravings by Winslow Homer capture the misery and drama of the civil war, and the lot of the Mill Girl.  Also engravings by Griswold, Fenn, Hennesy, Bushing, Hows,and Nehlig.  Elaborately decorated brown cloth on board with gilt edged pages. Inscription on ffep: "’ Merry Christmas’ To my dear  ‘Loudel’ from Angie, Dec. 25th 1871." Slight wear at heel and toe of spine, else very fine.  (2940) $50.00.  Poetry

Contact me at scoulbourn1@verizon.net
Posted by The Personal Navigator at 7:15 PM