Isaac Allerton and a few Friends 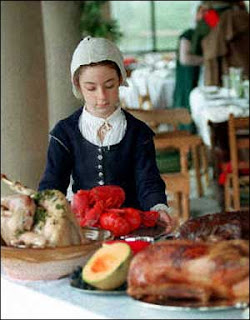 Remember Allerton looks over the food for Thanksgiving at Plimoth Plantation

The Late Reverend Peter Gomes* once said that if all the descendents of the Mayflower Puritans were put back aboard a ship, it would have to hold millions.
My family traces itself back to Isaac Allerton (1585-1659), an enterprising gentleman who was among those who landed at   on November 21, 1620.  The girl in the photo above is the young interpreter representing Remember Allerton, Isaac’s daughter.
We’ve visited Plimoth Plantation at  several times, and each time it has been a fascinating learning experience.  The cultural interpreters who populate this little town “live” in 1627.  Each of them has learned his part so well that when you talk with them, you feel you are really talking to a person from this colony. They talk in a 17th century English accent.  They are continually studying the history of .  They don’t know about radio, electricity or automobiles, or the .  There’s not a word for “fruit” in their vocabulary.  If it wasn’t common knowledge in 1627, they don’t know about it. 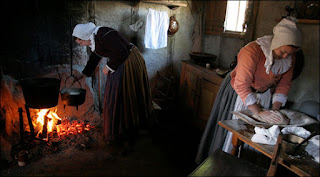 Pilgrim women at work in their home.

We think of the Pilgrims as English, yet they left  in 1609, and returned only in 1620 to board the Mayflower and the Speedwell to sail to the .  They all spoke Dutch.
By 1627 the Pilgrims figured they’ve seen it all.  During that first brutal, cold winter of 1620-21 the Indians never came near them, either to attack them or to make friends.  The Indians had met English sailors before. The sailors attacked the Indians, raped their women, and carried some back to .  The Indians had caught European diseases from them which nearly wiped out some villages.  So they stayed away from the Pilgrims.

We have the idea that the Indians the Pilgrims encountered were wild savages, but one day in March, 1621 an Indian named Samoset came walking up, and he had the ability to speak bits of English. Then he introduced them to Squanto, who had been kidnapped and taken to  where he trained as an interpreter.  It appears that Squanto was the kind of guy you hope you’ll meet in a foreign country, because he opened up this part of  for the Pilgrims.  He taught them how to tap maple trees for their sap, how to grow native crops.  He showed them the best fishing grounds, and introduced them to clams, mussels and scallops.
The original Thanksgiving Dinner, to which the Wampanoags brought venison from deer they had killed, also probably included wild turkeys, ducks, mussels, lobsters, swans, eels and cornmeal. Although they ate pumpkins, peas, beans, radishes, carrots, onions, lettuce, plums, grapes, walnuts, chestnuts and acorns, the meal probably was limited to various meats, seafood and cornbread made from Indian cornmeal.
There was no pie—they had no sugar, milk, or ovens.  And no cranberry sauce, again because the sugar they brought from home in 1620 was now long gone. 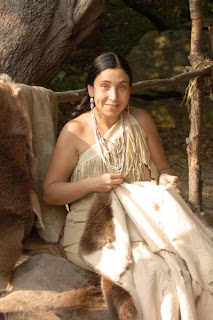 The Pilgrims and the Wampanoags seem to have gotten along well and in 1621 Governor William Bradford decided they’d have a feast and thank the Indians for teaching them how to survive.  It lasted three days.  That was the basis for our modern Thanksgiving Day dinner.
At Plimoth Plantation today, in addition to the Pilgrim village, there’s a Wampanoag village, but here, instead of interpreters, there are actual Wampanoags and members of other Indian tribes, to tell visitors about what life was like amongst the Indians in  in 1627.
Every time we have visited Plimoth Plantation, we ask about our ancestor, Isaac Allerton.  The Pilgrims always give us the same answer:  “He’s gone back to .”
It turns out that Allerton was something of a wheeler-dealer, traveling back and forth across the  as the colony’s business agent, buying and selling ships and goods. One of Allerton’s ships, a barque named Watch and Wait, was carrying 23 passengers, from Marbelehead to in August, 1635, when a fierce hurricane drove the ship against the rocks of an island just offshore here in Rockport. Antony Thatcher and his wife were the only survivors. The island was named for him.
It seems Allerton saddled the colony with debt, and was accused of pulling some shady deals, so he was eventually declared persona non grata.
We thank Isaac for his part in populating , and our family.  My aunt Emily Coulbourn Traband was a long-tire Mayflower Society officer in .   We named our daughter Susan Allerton Coulbourn, and she and husband Ted named their daughter Katherine Allerton Mocarski and their younger son Isaac Peter Mocarski. 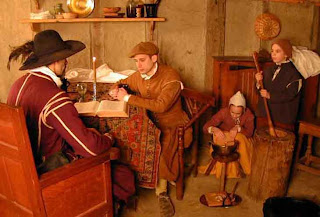 I wish you a very Happy Thanksgiving!

[Note: This Blog has been revised from one published in November, 2011.]

Here are some books and papers The Personal Navigator offers for your consideration: 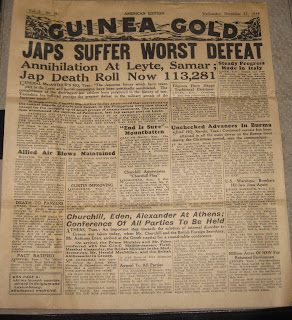 Gold, American Edition, Sunday, December 31, 1944 , Papua-New : Army/Royal Australian Army. 4 pp.    26.2 x 39 cm.    This unique World War II newspaper, published in and flown daily to and Australian troops all over South West Pacific command, often scooped the world, since General MacArthur released his communiqués to them 20 hours before they were released to the world press.  This issue's lead story on last day in 1944:  "Von Rundstedt Falling Back: Patton 20 Miles From U.S. 1st Army; Huge Nazi Losses." Report is from SHAEF. "Chinese Cross Burma Border into SW China: Link Up Likely"-- report from SEAC HQ in . "Scobie Begins New Attack on Greek Left Wing Guerrillas in " is report after Greek political factions failed to reach a solution to the Greek trouble. "Wave of Isolationism Again Sweeps Nation: Leaders Worry"--report from . Basis is distrust of power politics in .  Report from : "Wives Celebrate Christmas by Murdering Three Husbands". Woman in killed her husband with an axe after he got drunk and knocked their children about.  Woman in shot her husband with a rifle, then said, "I know I am a dead pigeon but I did get the duck ready for Christmas dinner."  The third woman, in , found her husband was having affairs with other women. She got him drunk, strangled him, and dismembered his body.     Newspaper,  small tears in folds, fair. (8206)  $40.00.  World War II 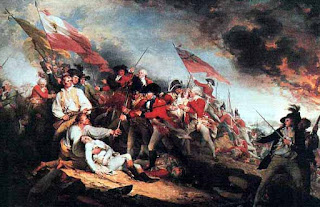 Revolutionary War: History of the Siege of , and of the Battles of , , and Bunker Hill, also an account of the , Illus. Second Edition by Frothingham, Jr., Richard 1851 , MA: Charles C. Little and James Brown. Author produced this book after he completed his History of Charlestown, MA, using many original sources, and it contains a very interesting 40 x 48 cm. fold-out map of the action at Bunker Hill, by Lieut. Page, which was originally published in  in 1776 or 1777. Fascinating account of Revolutionary War battles in and around , the raising of the American army, evacuation of the British, General Howe, Debate in Parliament. There is a 22-page History of the , and an appendix.420 pp. 14.5 x 23.5 cm.  Cloth on board, blindstamped with gilt medallion front and back; medallion on front is bust of , and on back cover is medallion showing the Recovery of Boston, March 17, 1776. Spine is torn for parts of front and rear hinge and inside front hinge is cracked.  There is a six cm closed tear in large foldout map of Plan of Bunker Hill Battle, and Plan of Boston and Environs is loose.  Plan of  facing Title page is missing.  All other maps and illustrations are present. Fair. (5782) $120.00. History/Revolutionary War/Boston. 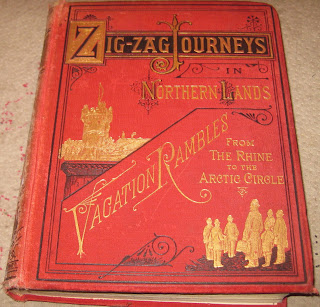 Zigzag Journeys in Northern Lands; The Rhine to the Arctic; A Summer Trip of the Zigzag Cub through Holland, Germany, Denmark, Norway and Sweden, Fully Illustrated    by Butterworth, Hezikiah 1883 Boston, MA: Estes and Lauriat. 320 pp. 17 x 21.5 cm.    Fifth volume of a series for youth, takes the reader to places most associated with German history, tradition, literature and art, gives a view of events  of those northern countries that once constituted a great part of the empire of Charlemagne.Many black and white illustrations. Decorated red cloth on board, moderate wear, inside rear hinge cracked, stamped name "Philip C. Johnson, , N.H." on ffep; on second free endpaper is inscription: "Henry Grant  Colony, Dec. 25th 1889 from Aunt Louise." Good condition. (8286) $26.00. Travel 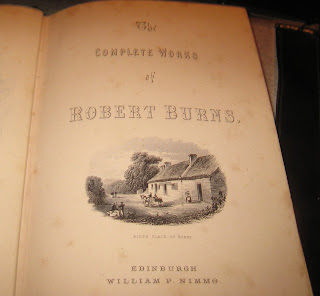 Complete Works of Robert Burns, The; Including his Correspondence, etc. with Letters to Clarinda, &c. &c.  With a Memoir by William Gunnyon; the text carefully printed, and illustrated with notes.   1873     : William P. Nimmo. 490 pp. + 16 pp. adv. 15.5 x 24 cm.    Scarce edition from Nimmo of Edinburgh. Preface explains that this edition contains Robert Burns' Poetical Works, although title does not make that distinction. Dedication to the Second Edition to the Noblemen and Gentlemen of the Caledonian Hunt. Includes 78 page Biographical Sketch and Appendix to the Biographical Sketch. Woodcut engravings include frontispiece portrait of Burns. Includes much General Correspondence, and Correspondence with George Thomson and Letters to Clarinda. Green cloth on board, slight wear on heel and toe of spine. Front free endpaper, frontispiece and title page loose, the rest of the text block is intact and tight. Thus good.  (8287) $85.00.   Literature

Posted by The Personal Navigator at 1:11 PM