Do you get a badge for being honest? 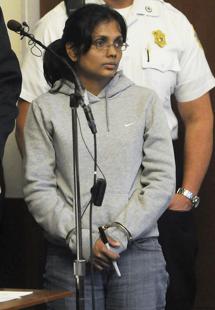 Annie Dookhan in Court
Courtesy of the Globe

There’s a strange case slowly rolling out in right now.  Annie Dookhan, age 34, a tiny woman, is alleged to have mishandled some 34,000 cases of evidence obtained in arrests of drug dealers and other troublemakers during the past decade.
Already, some 2000 prisoners have been released or are about to be, with thousands more in various stages of litigation to go free.
Many of these people are guaranteed bad actors, with murders and other crimes on their records, but with the current good luck to have had evidence in their criminal prosecution handled by this tiny little lady.
Was she some hidden activist, dedicated to setting these men free? No.
In fact, she reportedly added cocaine to samples where there was none.

Apparently, she discovered that, in order to fill her quota of tests every day, in order to get her job done, and look good, all she had to do was cheat!
This apparently intelligent young woman figured out how to fool the system, and according to reports that are coming out now, she fooled the system six ways from Sunday.  She even lied about her academic credentials to get hired!

Law enforcement all over the has the problem of working very hard to catch the bad guys, and obtain the evidence needed to put them in prison.  By most accounts, they do an excellent job, and there are safeguards to protect the wrongfully accused, both in the police system and in the justice system.
However, when tests of evidence are backlogged for months, no one is well served.
Annie found out that it was easy to cheat, and according to reports of her case, cheat she did. She eyeballed test samples instead of conducting the proper chemical reaction test. When a double-checking chemist returned her samples that showed a mismatch, she allegedly added known narcotics to samples which contained none. She forged other chemists’ initials on sample documents. She moved the tested products out the door, correct or incorrect, and corrupted the laboratory’s system so badly that the State had to shut it down.
Now, no matter what happens, Annie is marked for life as a CHEAT.
Even in this era when over 100 kids are accused of cheating on an exam at Harvard, society still looks down on cheats.

Most systems in most places are based upon the assumption that people are honest, and want to do the right thing.
There are backups, and safeguards and double checks, but mostly they exist to detect human error.
And then along comes someone like Annie.

Now, the will likely install all manner of safeguards to prevent a repetition of this disaster.
We, the public, should expect that this process takes place in full view, and the new officials and employees who are installed are competent, well-regarded, and have the academic credentials they claim to have.

Are we growing a culture in our society that learns that cheating is okay?

Annie Dookhan’s actions may have created for all of us a TEACHABLE MOMENT.
What can we do in our schools to drive home the concept of Honesty?

Is there more that can be done in our society to teach children time-honored lessons like “Cheaters never win and winners never cheat?”
Let’s work on it! 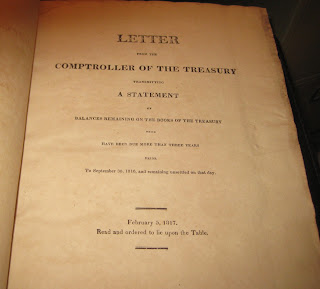 State Papers of 14th Congress: Reports from Secy of the Treasury, Comptroller of the Treasury, Acting Secretary of War, Postmaster General, et al on Accounts of the U.S. Treasury  as of 1816 1817 Washington, DC: William A. Davis, Printer for U.S. Government.  Bound collection of letters from the Secretary of the Treasury, Comptroller of the Treasury, Postmaster General, et al. Includes listings of debt for the late John Adams, ex-President, and Meriwether Lewis, Late governor of the . owes the government $12,898 for housekeeping when he was president. Comptroller reports to President Madison that this expense was deemed inadmissable by his predecessors...Late Lieutenant James B. Decatur owes $130.75, which won't be recovered: "He fell before ". Meriwether Lewis, famed for the Lewis & Clark Expedition of the , was later Governor of the . This book shows he owed the Government $571.50. But he died in 1809, so no account is rendered. Report from Secretary of the Treasury William H, Crawford on direct taxes and other revenues collected. Reports are also sent to Speaker of the House Henry Clay. Also Crawford reports on public lands sold in Mississippi Territory 1,073,842 acres for $2,303,366. Also lands sold in states of and , and adding $15 million. Acting Secretary of War report includes statement of $1435 paid to George Fisher for carrying express mails by order of General (Andrew) Jackson. Also $1500 to Lewis Cass, Governor of Michigan Territory, for seed wheat for distressed inhabitants of said territory.Many pages of small expenditures for recruiting, advertising for deserters, and stage fare for deserters, also for toll at turnpike gates, shoeing horses, wood, forage for public horses, drum heads, tin pans. There's an expense of $312 to Lieutenant John Donelson in General Jackson's  army for an expedition against the Creeks in 1813, on expedition to and New-Orleans in 1814. This is a marvelous financial picture of the in the early Nineteenth century. 21 x 33 cm.  Marbleized paper with leather spine. Gilt title: "STATE PAPERS 14th Congress". Rough-cut paper, with many fold-out pages. Good condition, binding intact.  (8268) $90.00. History 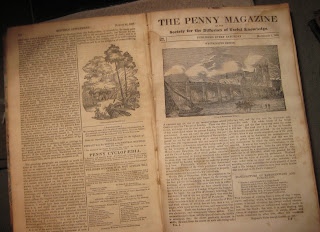 Penny Magazine of the Society for the Diffusion of Useful Knowledge, The, Vol. I, March 31 to Dec. 31, 1832 by Knight, Charles 1832 , : Society for the Diffusion of Useful Knowledge. Lord Brougham was the instigator of the Society for the Diffusion of Useful Knowledge in in 1826, and it published its first weekly eight-page issue in March, 1832.  The intent was to spread knowledge amongst the poor, and this little paper was distributed all over the , selling 200,000 copies at its peak.  Publication ceased in 1844, after demand had faded and publishing expenses grew too great. Articles in this first volume did not patronize the uneducated--, now greatly improved, illus. with woodcut.  , with woodcut, recently discovered, article takes readers on a walk through the city. British animals: The Dormouse, and the Mole, with illus. "On the Choice of a Labouring Man's Dwelling"; History of Somerset House, with illus.  Sugar, its agriculture and production. Statistical Notes on the population of and . Instruction of the Deaf and the Dumb. " "--old bridge is almost pulled down and the now sweeps through the five broad arches of the new bridge.Review of "Memoirs of the Life and Writings of Benjamin Franklin". The --article describes obelisks, with illustration. "The of " with illustration from the largest state in the American Union. "Mahogany" (Swielenia mohagoni) notes that until recently only the rich could afford a mahogany table, but now (1832) anyone can. All about cutting and transporting from . Many more abstruse topics for the poor. 389 pp. + index 18 x 28.5 cm. (11½” tall). Marbled boards with calf spine, front cover detached, text block has damp stain on first 85 pages, yet good.  Overall, poor.      (8269) $92.00. Educational

Fly-ing Dutchman, The; or, The Wrath of Herr Vonstoppelnoze with sixteen comic illustrations by John G. Saxe,             1862 : Carleton, Publisher, 413 Broadway. 35 pp. + adv.   13 x 19.3 cm. This book is widely available in new reprints, but this  is the 1862 edition with clever cartoons and a poetic story about the combat between and annoying fly and Herr von Stoppelnoze.   Dark brown blindstamped and decorated cloth on board with gilt title. Inscription on ffep: "Miss Louisa Grant". Slight wear on corners. Very good. (2932) $18.00. Humor

Sermons by the Late Rev. George Shepard, Professor in Theological Seminary, With a Memorial by Prof. D.S. Talcott, first edition           1869     : Nichols and Noyes. 368 p.  13 x 19.5 cm.    This book today is widely circulated in Print on Demand and electronic versions, but this original 1869 edition is the one that captured the attention of so many. Rev. Shepard (1801-1868) preached the Gospel, and was unsparing in his criticism of slavery.  At his death he was praised by the noted abolitionist, William Lloyd Garrison. Memorial by Prof. Talcott relates life and brilliant theological path of Rev. Shepard, from birth in 1801 in , on to preaching in and Professorship at Bangor Theological Seminary. "The Diversions from Preaching" criticizes popish influences in the contemporary Protestant churches. "The Eclipsed Luminary" preaches from Matthew. When the Christian ceases to shine, and darkness comes in its place, it is very great darkness. "Salvation in  no Other" from Acts iv. 12. "The Shipwreck of Paul" from Acts xxvii. 22, 31. Better to put trust in God, rather than bolts and planks. "Elijah the Tishbite" from I Kings xvii. 1. "Not Fit for the Kingdom" from Luke ix.62, preaches a stern message for the converted. "The End at Hand" from I Peter iv.7. and more.           Decorated brown cloth with gilt design and lettering on spine. Engraving of Rev. Shepard at frontispiece. "Nellie Grant" stamped on ffep and "" written in pencil. Clean and tight copy. Very good. (2929) $48.00. Religion

Sovereigns and Courts of Europe, The by "Politikos" with Portraits, Authorized Edition 1893     : D. Appleton and Company. 439 pp. w adv. 12.8 x 19.6 cm. This book today is widely circulated in Print on Demand and electronic versions, but this 1893 authorized edition  captured the attention of many for its gossipy "insider-story” style. Sultan of mysterious 1876 death of ex-Sultan, five days after he was deposed on plea of insanity. Alexander III of Russia's story begins with death by horseplay in 1865, assassination of his father, Alexander II in 1881 and Alexander III's accession to the throne, celebration for half a million common folk at one huge dinner... William II, Emperor of Germany, whose birth in 1859 was heralded all over by a 101-gun salute. Death of Victor Emanuel I, first king of unified brought great sadness, and King Umberto I is now king.  He is the only man generally respected in , author writes. Book ends with long section on Queen of , whose portrait serves as frontispiece.            Decorated maroon cloth on board with gilt and red printing. Slight edge wear and worn spot on back cover. Inscription on ffep: "Happy New Year dear Nellie (Grant), 1893 Angelina P. ." Very clean and tight. Very good. (2939) $36.00.  Biography 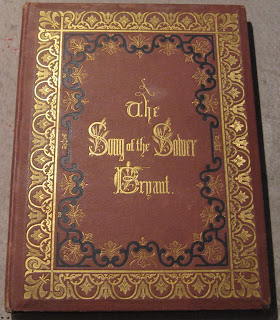 Song of the Sower, The by William Cullen Bryant, illustrated with Forty-two Engravings on Wood           1871 : D. Appleton and Company. 48 pp.     17 x 23.5 cm. This book today is widely circulated in Print on Demand and electronic versions, but this 1871 edition is truly an elegant work of art.  Add to that the owner carefully slipped poetry from newspapers in the 1880s and put them in the pages, but didn't stain the pages.  Beautiful engravings by Winslow Homer capture the misery and drama of the civil war, and the lot of the Mill Girl.  Also engravings by Griswold, Fenn, Hennesy, Bushing, Hows,and Nehlig.  Elaborately decorated brown cloth on board with gilt edged pages. Inscription on ffep: "’ Merry Christmas’ To my dear  ‘Loudel’ from Angie, Dec. 25th 1871." Slight wear at heel and toe of spine, else very fine.  (2940) $50.00.  Poetry

Contact me at scoulbourn1@verizon.net
Posted by The Personal Navigator at 6:45 PM